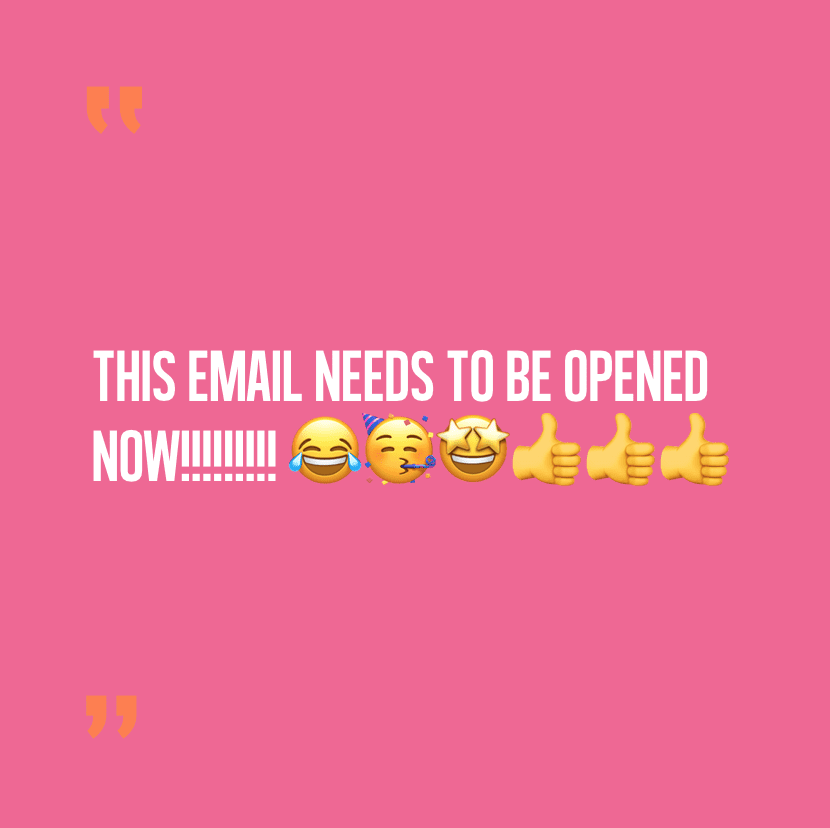 You know that landing in someone’s inbox is the best way to market to them. And you know that most people get a load of emails each day. You need yours to stand out. So you achieve this by WRITING IN CAPITALS and adding loads of !!!!! and **** and emojis, right? No, not right…

As a journalist and editor, I’m in the both privileged and unfortunate position of being on the receiving end of hundreds of PR emails every week. It’s unfortunate, because most of them are utter shite. But what this means is that I can dissect these emails and share my learnings with you.

One of the most over-used and annoying tricks is to WRITE THE WHOLE SUBJECT IN CAPITALS thinking that this will get people to open the email. It will often say something like:

And I don’t open it. I put it straight in my email bin and move onto the next email.

Another trick is to use loads of punctuation, to make the email header stand out in a crowded inbox. So it might say: You’ll **NEVER** guess what this mum did!!!!!!!!!

Guess what? I delete those emails without reading too.

Lastly, there are emojis. A laughing face, or thumbs up. Maybe a crying face, if the story is sad.

These emails look, to me, like a child has typed them up. My daughter loves writing out messages on my phone packed with emojis and no words. She’s five. These emails aren’t coming from five-year-olds so they shouldn’t be crammed with childish images.

And, by the way, what I’ve said above isn’t just personal preference; email servers don’t like these things either. You’ll be penalised if you litter your headline with punctuation, emojis or capitals.

If you’re on Mailchimp, you’ll see they now have tickboxes to show you whether your subject line is good or not. And both emojis and punctuation are included as ‘things to avoid’. A bit is okay – the occasional ! or smiley face. But not repeated, and not in every subject line.

If you want people to open your email, put yourself in their position. What would get you to open an email? What would appeal to you? What would make you feel curious about the rest of the story? Keep it short, inviting. Don’t overwhelm.

I’ll give an example. Let’s take that mumpreneur selling nappies story. What we need to do is pull out the part of that story that matters – is it that she’s made $3,000,000 or is it why she’s made that much money? Perhaps the nappies are the first ever actually biodegradable nappies.

‘Mumpreneur’ is over-used – and patronising. Female founder is interesting; women are less likely to become millionaires than men, right now, so this is an important part of the story. The fact that she’s a mother can come later (if at all).

‘First ever’ is a big claim. So it really would need to be. But if it is, go with that.

And including the fact that she’s become mega rich is going to pique interest: we all want to know how to make more money, right? This is a human interest story; we need to be interested.

Got any good examples of email subject lines that have worked for you?