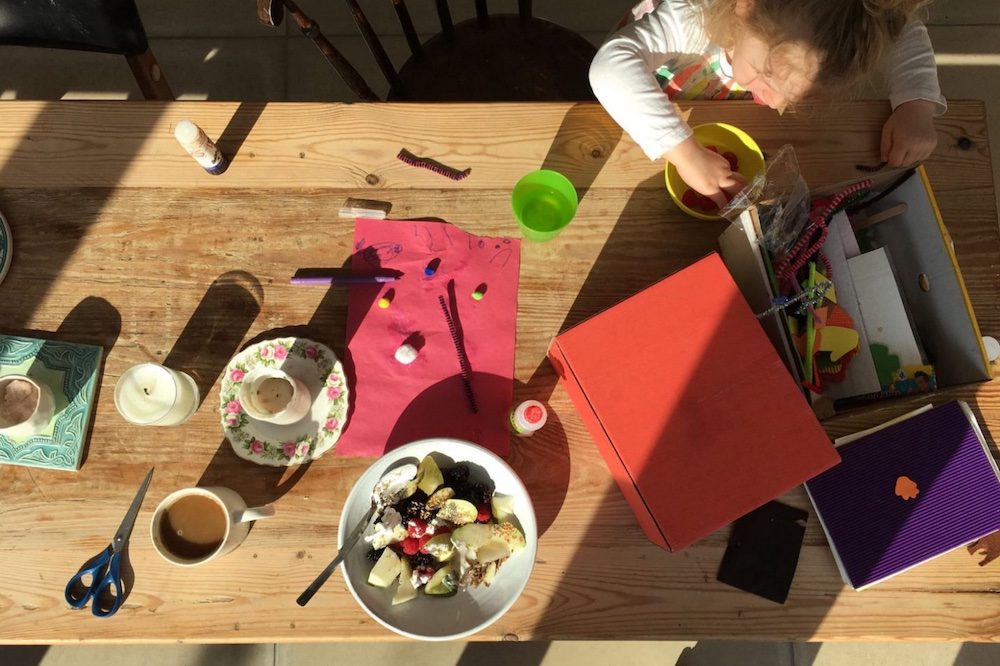 With 92% of self-employed mothers arranging – or doing – all childcare over the holidays, there are huge implications in terms of both widening the existing gender pay gap and reducing the potential for career growth. Annie Ridout says it’s time the dads stepped in during the holidays…

As we approached half-term – which, for an unknown reason, is two weeks for my state-educated children, rather than the usual one week – I found myself panicking. I run an online business, have coaching clients, articles to write for my own magazine and ideas for those I’d like published elsewhere. I run a podcast too.

But for those two weeks, I would now be ‘on duty’ with my children. Finding activities to keep them entertained, making breakfast as usual but also lunch and then dinner. I was having thoughts like: I’ll just work once they’re in bed, it will be fine. I’ll note ideas down while we’re out and about and action them at 8pm.

Except it wouldn’t be fine, as come 8.30pm, I often feel ready for bed. I’m in winter hibernation mode and looking after three children – aged eight, five and three – is exhausting. I don’t have the energy, or inclination, to write into the night.

Instead, I started thinking about what work to pause, during the holidays, and what work I could sneakily do while they watched telly. But then a wonderful thing happened. My parents came to stay and it was decided that they would take the older two kids home with them.

The plan was that I would join the following day with the youngest. But when I realised he actually still had nursery for a week, I asked how they would feel about me staying home to work, while they looked after the older two children. They kindly said that would be fine.

The sense of relief and excitement that I felt with these newfound hours to work surprised me. I hadn’t realised quite how worried I felt about having to step aside from some parts of my business for two weeks and somehow fit in the other parts (like coaching calls) around looking after three children.

Now, I had from 9am until 3pm to work freely. Two hours less than your average office day but a vast improvement on what I’d been preparing for.

It occurred to me that holidays seem to have automatically become my domain, as the mother. I live with my husband – my children’s father – and much of our domestic life is fairly shared. We have our roles within the home and both contribute equally. Likewise with work: we both earn and pay into the household fund.

But I realised it’s only me planning my work around school holidays, meaning for 15 weeks of the year, I lose out on income.

When I’m planning and budgeting, I always include my ‘dream’ which is to earn enough in the remaining 37 weeks to compensate for those 15 holidays weeks. If I could earn really good money to tide me over during the holidays, plus the knowledge that work will easily pick up again during term-time – it would be amazing.

I’d love to work only 37 weeks a year, as I relish holidays, breaks, rest and time with my young children. But like with many young businesses and freelance careers, my income fluctuates. Some months are great, while others I don’t earn so much. I make it work but right now, I’m not in a position to take 15 weeks off each year.

More to the point, it shouldn’t be an assumption that I will be available to look after my children for all those weeks, instead of a conversation with my partner. Women hear messages like: “you’ll never get this time back with your children” and assume it would be detrimental to have too much of a career.

This makes it hard to extract what we actually want from society’s expectations of what we should be doing. But what about the dads? Men don’t seem to worry about having a 9-5 job or working through the children’s school holidays. There certainly isn’t a societal pressure to be more involved.

On reflection, I’d say the only time in my career, since having children, that home and work-life felt truly balanced and actually, quite harmonious, was when my husband came to work with me on my business. Having the same focus, the same source of income and the same responsibility made everything simpler.

Whoever needed to work would do that, while the other cooked dinner or collected the kids from school. We took it in turns, shared the load and I felt for the first time since becoming parents that we were truly equal. But the pandemic shattered the dream, and we made the decision to work separately (less pressure; some separation).

So we’re back to finding ways to both work, stay connected to the children and do our bit in the home. But holidays is the one area that has slipped through the net and I had a hunch that the situation would be the same in many heterosexual households where both parents are living with – and raising – the kids together.

I put out a poll on Instagram, asking freelance mums and women running businesses with young children whether holiday childcare falls to them and 92% said yes. I expect many of them work from home, which means it’s assumed they can throw childcare into the mix fairly easily and ‘juggle’ it all, as mothers always do. 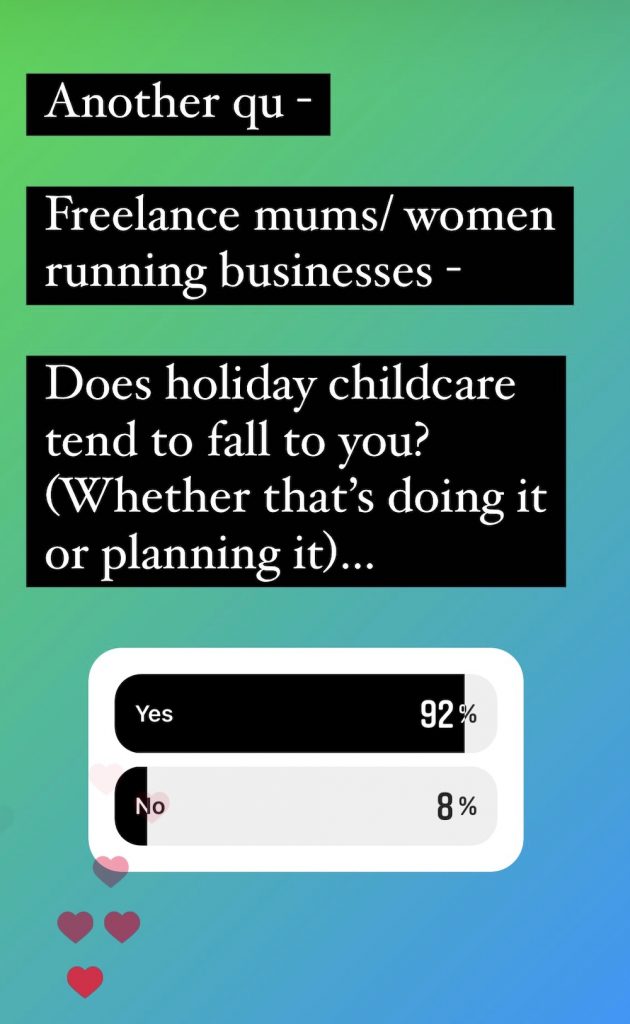 However, adding childcare on top of our freelance work really means not working, because children don’t sit patiently while you make work calls or send emails. They ask questions, demand snacks, interrupt you. They don’t care how important the phone call is – if you are within eyeshot, you are essentially ‘available’.

So instead, we find ways to reduce our workload. Push it to one side, or pause it. During those weeks, we earn less money or none at all, adding to the existing motherhood pay gap.

It starts during the maternity period, where mothers take an average of 39 weeks maternity leave, while 71% of men take two weeks paternity leave or less and this pattern often automatically continues through into the early years. Childcare becomes predominantly the mother’s work, even when she’s also working on her career.

With 68% of mothers feeling burnt out and ‘overwhelm’ having become a buzzword for how mothers of young children often feel, this needs to change. We shouldn’t be burning out, feeling overwhelmed and also having significantly less time to do paid work, which has a longterm negative impact on our financial situation.

Having all the school holidays with the children doesn’t just impact us in terms of immediate earnings but it also has an effect on client work. There are consequences to ‘not being available’ to work 13-15 weeks a year, like: people hiring a man instead, or a woman who doesn’t have kids.

I will be sitting with my husband and future-planning holidays from now on. We are both self-employed and usually, holiday-planning is very last minute but I will be looking at the year ahead to pinpoint time for him to work during the holidays, and time for me.

It’s a boring task but essential, as my work matters to me, as does continuing to earn a decent living.

There will be scope for some chopping and changing, if one or other of us has an unexpectedly heavy workload but any extra ‘childcare’ time I take on, during the holidays, will be done with the knowledge that I can claw it back in future, when needed.

Society still places mothers at the forefront, in terms of childcare. But that’s only because we do so much more of it. If we create a more balanced home, in this respect, the view of two-parent families will automatically shift.

My husband and I chose self-employment for the flexibility; we want to be around for our children. But it’s crucial that we are taking it in turns to be around during the holidays, rather than me simply adding ‘holiday childcare’ to my list of responsibilities.

The Freelance Mum: A flexible career guide for better work-life balance by Annie Ridout is full of tips for setting up, and growing, your freelance career once kids are in the mix – including different childcare options.