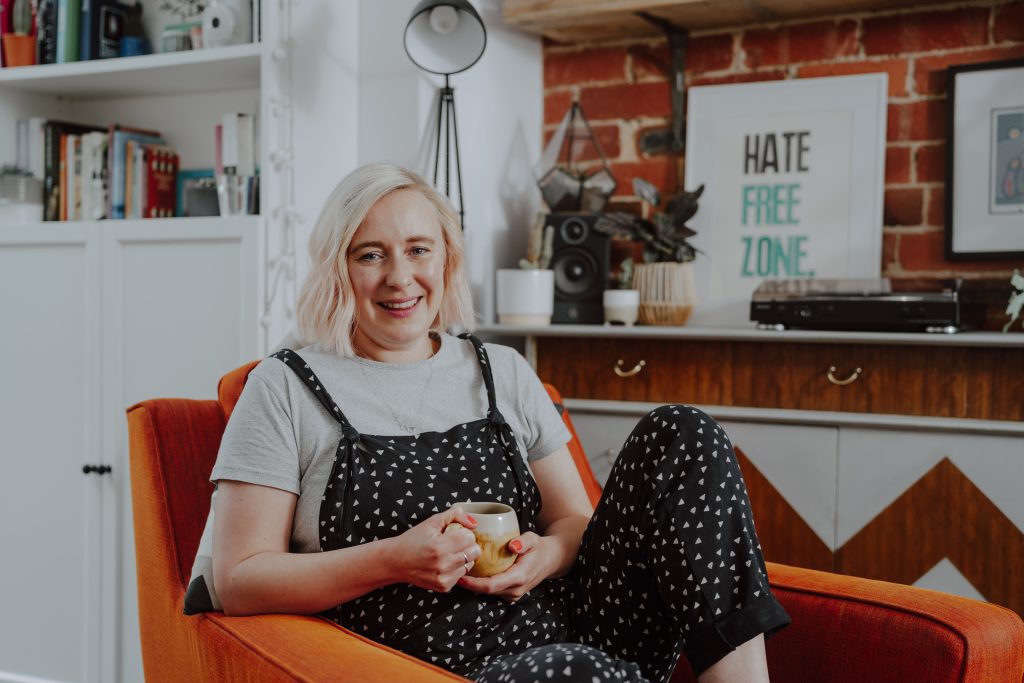 Growing up in a working-class family in the Midlands during the 90s, Tori Beat didn’t feel any pressure to ‘be’ anything in particular. But this changed when she moved to London and unexpectedly moved into – and then out of – a career in law…

Sense of identity is a funny old thing. I certainly feel like I’m still getting to know myself, nearly 38 years in. But what happens when our identity becomes so blurred with our career that it’s impossible to separate the two?

Psychologists call it enmeshment and it can have a damaging effect on our mental health.

Until August 2019, I worked as a lawyer. I had worked really hard to get there and took great pride in what I’d achieved. But I had become so deeply ensnared by my job that I’d completely lost sight of who I was, along with any remaining sense of self-worth. So when I resigned, knowing I would never be returning to that industry, I felt bereft. As if most of my value had been stripped away.

Growing up in a working-class family in the Midlands during the 80s and 90s, I don’t remember feeling any pressure to ‘be’ anything in particular. I was encouraged to follow my interests. Work hard and be kind. And try to earn enough money to live comfortably in the process. I did well academically and I loved learning, but there was never any overt pressure to go to university or chase a particular ‘calibre’ of career.

When I moved to London aged 20 – with no degree – I remember a regular opener in most conversations was “so what do you do?”. Fair enough, it’s a nice ice-breaker; a good initial talking point. But I felt like it was often heavily loaded. And that the response I gave would make-or-break whether I was going to ‘fit in’ to that particular circle.

Invariably, the second question would be “where did you go to uni?”. Again, a bit of a non-starter for me as I never actually went to university. I quickly realised that the two most interesting elements of my personality – to other people at least – were surrounding my career and education. There was significant cultural capital up for grabs in your job title.

So when I joined a central London law firm as a paralegal in 2005, I was plagued by this idea that I needed to be something I wasn’t. Truth be told, I wasn’t really sure what I wanted to do, but the pay was good and it seemed a good starting point to figure out my path.

The networking events I was expected to attend were dominated by white, upper-middle class men of a certain age and, more often than not, unless you had a prestigious education or were on a graduate training scheme at a Magic Circle firm, no one paid you the least bit of interest. There are few conversation killers as powerful as “oh I didn’t go to university” at parties like that.

Perhaps that’s what spurred me on to qualify as a lawyer, despite not having the traditional law degree. This seemingly innocent line of enquiry around my job and education started to encapsulate everything about my personality that I thought was important or interesting.

Before long it had become an integral part of my self-worth. So much so, that when I gave up my 15-year career in law because of the impact on my mental health, I started to question who I was. By this point, I hated my job and it had caused me to have a breakdown. It had eroded my self-confidence and stolen precious time with my then-infant daughter.

But I couldn’t seem to come to terms with the fact that I’d no longer have that badge to wear – to hide behind, perhaps. It made up for, what I perceived to be, a major lack in anything remotely impressive about myself. What could I possibly talk to other people about now?

I’ve always had hobbies outside of work but, often, very little time to actually pursue them, especially once we started a family. The job had become all-consuming, sapping any available time and energy. I didn’t have the confidence to talk about anything other than my work.

So when that disappears, whether it’s by choice or not, you can find yourself on a slippery slope of self-doubt and low self-esteem. It’s hard to pick up the pieces and start reassembling the puzzle of ‘you’.

It’s taken me a long time since leaving the profession to start to feel like a whole person again. Someone who has a purpose and personality; something to say and the confidence to say it. I’m still working on it. I can’t seem to let go of the ‘former lawyer’ line just yet.

Maybe one day I will. I hope so. Because, although it can be interesting, there is so much more to us as humans than what we do – or used to do – to pay the bills.