I wondered: Would it be possible to work from home on a Greek island? 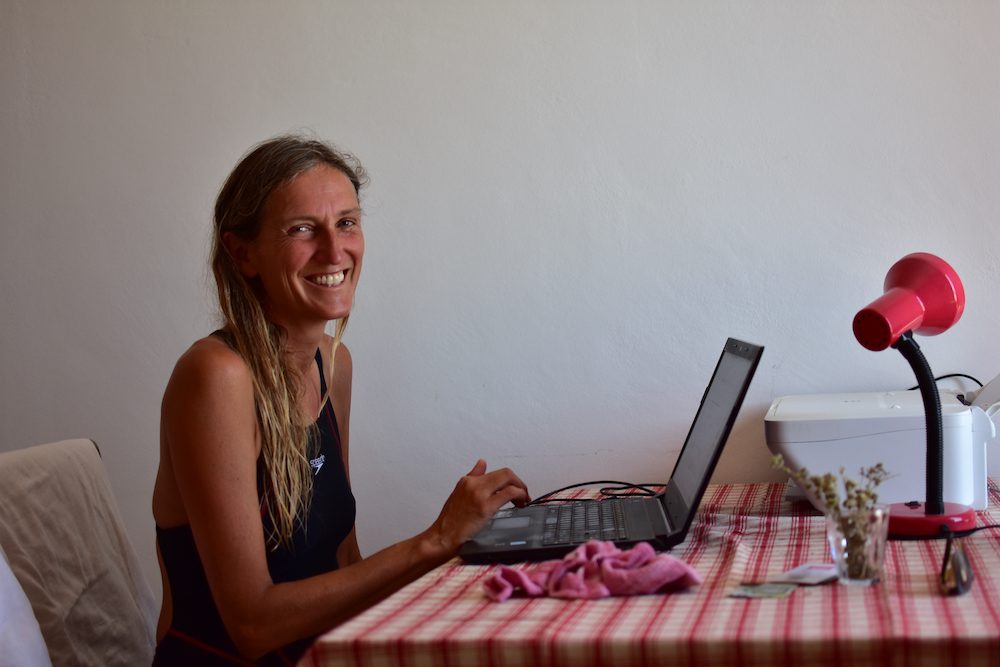 ‘I was better at my job when I was happier, taking breaks to swim in the sunshine or walk the herb-scented hillsides. I was more focused, less stressed,’ writes Jennifer Barclay. So she moved to Greece where she has a rather idyllic-sounding life writing books…

I’ve had a busy couple of days. I’ve talked to a newspaper journalist and a film producer about my books, gathered in the last of the grapes and figs from my garden, walked with my dog to various beaches and swum in the sea countless times. That’s the kind of busy I like.

It was just after I turned forty that I decided I needed to do something to make life better. It sounds like a cliché, but there was something about turning forty that made me think: what are you waiting for? If you haven’t got the life you want yet, then it’s time to start making it happen.

I’d worked since my early twenties in the book publishing business – and don’t get me wrong, it was fun. For a few years I was the youngest literary agent at a thriving agency in Toronto, working non-stop but learning heaps, reading widely, seeing how books happened; I took my birthdays off work to do my own writing.

I did that for seven years, took a couple of years out to travel and write and become more of an editor, then returned to England and got myself another demanding job as editorial director of an independent publishing company. More learning and excitement, but the years started rolling around fast again and I could never quite keep up – the usual treadmill.

Still, my partner and I were making plans to move somewhere exciting and do something different… It was only when he changed his mind about our relationship that I realised they’d been his plans all along.

As I turned forty I was suddenly alone, devastated, miserable. Thankfully, a plan gradually emerged – and looking back, I think it was a pretty good one. I would stay away from relationships for six months, give myself a day off work every week (‘Freelance Fridays’) to do my own creative projects, and have a month alone on a Greek island.

Greece had always made me happy, and in fact I’d lived in Greece for a year when I finished university. Back then, when that year ended, I wanted more from life than I could get by living on a little Greek island at the time; and when I’d taken a career break in my early thirties, my partner had convinced me to try France instead.

But twenty years later, I had only myself to please, I had lots of work experience and contacts, had freelanced before, and the working world had moved much more online. I wondered… Would it be possible to work from home on a Greek island? I gave it a try for a couple of weeks.

It turned out fine – in fact, more than fine. I was better at my job when I was happier, taking breaks to swim in the sunshine or walk the herb-scented hillsides. I was more focused, less stressed. I decided to go for it and make the move – rent a house, take my laptop. What was the worst that could happen – that I’d have to come back? But at least I’d have given it a try.

The journey to Mediterranean bliss was bumpy because – guess what? – after the six months were up, I got into another relationship. But I made it to my little Greek island at the age of forty-two, alone, and was warmly welcomed to my new life.

Within a few years I was working for myself as a freelance editor and independent literary agent. I’d taken a big pay cut but I found it didn’t matter, and I felt more fulfilled by my job. It became more accepted to work from home, and online communities were growing.

I was free to take time out for my own writing, and the company I used to work for published my book about moving to a Greek island.

Ten years after making the move I still have a boss, but she’s four-legged and furry and snoozes most of the day near my feet until it’s walk-time.

My fourth book set in Greece is out this month. It’s about how, needing a break from work a few years ago, I took the summer off to help run a taverna at a remote beach on a nearby island. It’s a behind-the-scenes look at life in a taverna and hotel, a summer in a magical landscape with moonlit swims and pink dawns over the olive grove in an empty valley, with a kitchen full of creamy yoghurt and honey, tomatoes and fresh fish. It’s also about trusting your instincts and taking risks. I feel very lucky to have the life I wanted, and I’m glad I gave myself the chance to look for it.

Jennifer Barclay lives on the island of Tilos in the South Aegean. Her fourth book, Taverna by the Sea: One Greek Island Summer, is now available from Bradt.

Taverna by the Sea | Bradt Guides